Hyundai has finally unwrapped itself from the Creta N Line. It is believed to be the Creta SUV’s more luxurious and sportier look. The official teasers of the Hyundai Creta N Line were shown a couple of days ago/. It hinted at what the powerful, performance-oriented version of the SUV can do. The SUV can return to India next year, that is, 2023.

The Hyundai Creta N Line variants are yet to be announced.

The Hyundai Creta N Line-colour choices are yet to be announced. 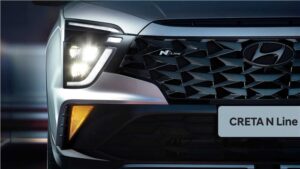 Hyundai Creta N-Line’s appearance will have sharp looks compared to its previous models.

Compared to the i20 N Line supported by the regular i20, the Hyundai Creta N Line gets a lot of new visual changes, particularly to its front profile. The new N Line version gets a lot more aggressive and bold front. It consists of a broader and slimmer dark-chrome grille with sharp-looking inserts.

It gets a sleek and horizontally-laid vent on top of the front grille that also comes with the N Line badge on its left side. This adds to the visual charm of the SUV. Next, the LED headlamps with triple LED projectors and divided daytime running LEDs are kept the same as the regular version of Creta. The front bumper is all-new with triangular LED fog lamps and a black skid plate.

Moving on to the side profile, the new Hyundai Creta N Line has received a few minor but better changes. It gets a new style for the 17-inch alloy wheel. It also has the N Line badge on the front of the car.

Compared to the present version of the Creta, the new Creta N Line gets a new rear profile. The black horizontal stripes across the dimension of the boot lid have been removed. Instead, they added new creases beside the LED tail lights. It also gets twin available exhaust ports, N Line signature bits, and a faux rear diffuser. 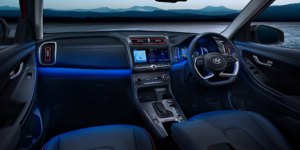 The cabin of the Hyundai Creta N Line appears just like that of the regular version of the Creta in terms of layout and options. However, there are some refined N Line-specific modifications like-

Except it retains all the options offered in the top-spec SX(O) variant of the Creta. This includes-

You can also check out Motofoto for Used Cars in Delhi NCR and more details.

However, the India-spec version of the SUV may get the 1.4-litre four-cylinder with a 140 PS turbocharged petrol engine. It will also come along with 7-speed dual-clutch automatic case from the Creta turbo-petrol.

The Hyundai Creta N Line SUV can come back to India next year in 2023.

The Hyundai Creta N Line price details are yet to be announced.

We hope that we have answered the question that you were looking for. If you have any queries regarding this topic or services or want to buy a Used Car in Delhi NCR, you can contact Motofoto, and they will guide you.